In October 2016 lupin anthracnose was detected for the first time in commercial lupin crops in NSW in the eastern Riverina region. NSW DPI and LLS rapidly implemented a response plan to eradicate the disease. With cooperation from affected growers a case by case assessment of the infected crops was implemented to contain and control the disease. A lupin anthracnose biosecurity management zone was established, restricting the planting of lupins within the zone during the eradication response.

Ongoing surveillance of lupin crops for the disease within the zone and across NSW has found no re-occurrence of disease.  Seasonal conditions in 2020 and 2021 have been highly favourable for the disease to develop, with symptoms of the disease most obvious during flowering and podding.

Growers and advisors are asked to monitor crops closely in the next 2-4 weeks and report any unusual plant symptoms. Periodic scouting of crops for symptoms during flowering is a great way to ensure your crop is free of disease.

Email biosecurity@dpi.nsw.gov.au with a clear photo and your contact details 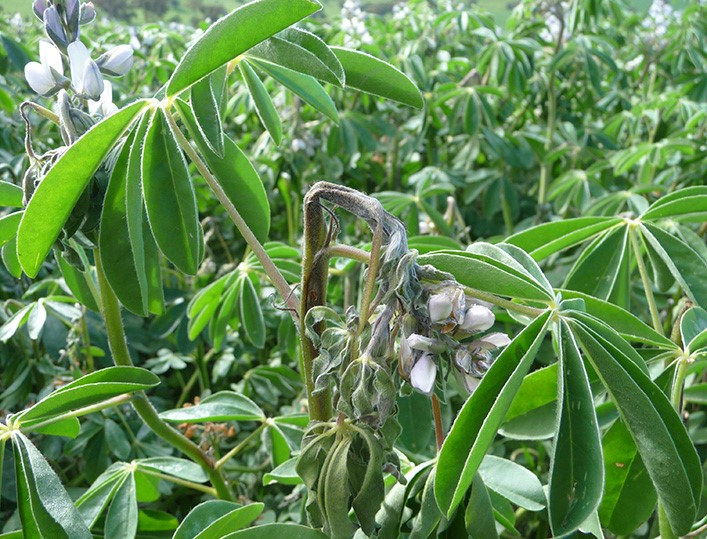 Lupin anthracnose is caused by the fungus Colletotrichum lupini, previously known as Colletotrichum gloeosporioides, and is the most serious disease of lupin in Australia. . The disease has the potential to cause complete crop losses in susceptible varieties, including all current albus lupin varieties grown in NSW.

Lupin anthracnose is a notifiable plant disease in NSW.

Symptoms of lupin anthracnose can be seen on all above ground parts of the lupin plant. If infection occurs early in the season lesions can be found on seedlings.

The most obvious symptom on lupin is the bending and twisting of stems, known as the “shepherds crook”, which is particularly noticeable when the crop is flowering (Figure 1).

Oval shaped lesions occur on the side of the stem and eventually lead to collapse and bending of stems. Lesions can be up to 2 cm in length and contain a bright orange/pink spore mass.

Later in the season as the disease progresses, lesions can develop on the pods, causing distortion and twisting. Infection of pods can lead to complete pod loss, and the production of infected seed. Infected seeds can be malformed, and have brown lesions on the surface. Seeds can also be infected without showing visible symptoms.

Lesions produce an abundance of fungal spores which are spread through the crop by rain splash. The fungus can survive over summer on infected lupin stubble and spores can be splashed to re-infect seedling lupins which come into contact with infected stubble.

Movement of infected seed is the main source of spread of lupin anthracnose. The fungus can survive for up to two years on lupin seed and possibly longer under some conditions.

The disease can also be spread via infected stubble.  Within crops spores can be spread through rain splash, contaminated machinery, vehicles, people, animals and fodder between lupin crops and cropping areas. Spores are not airborne.

Lupin anthracnose is established in Western Australia and has spread through wild populations of blue lupins (L. cosentinii). The disease has also been found in commercial lupin crops on the Eyre Peninsula and South East cropping regions of South Australia.