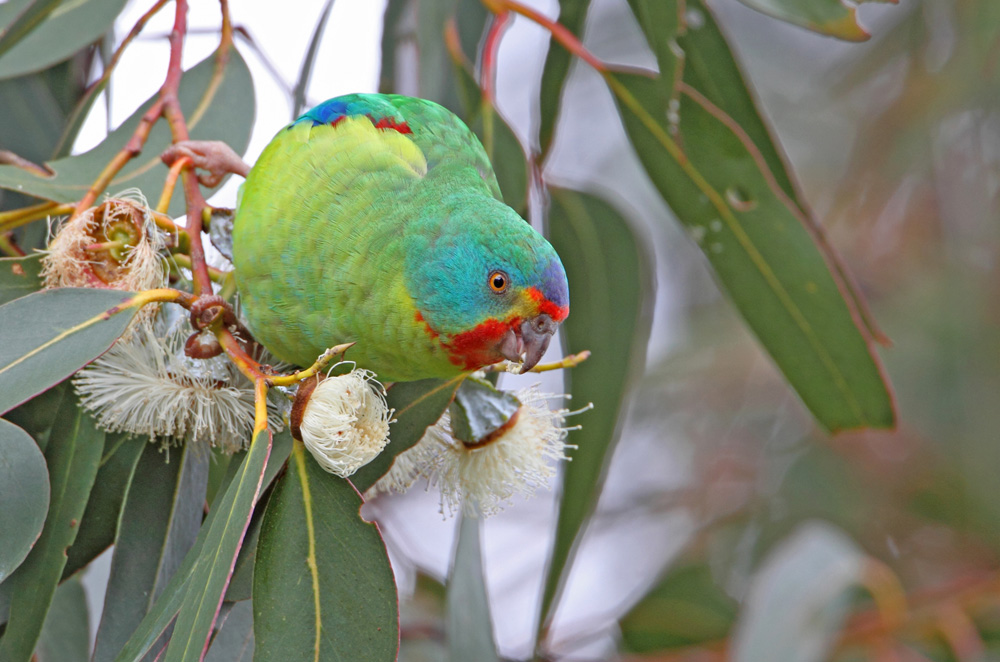 The Swift Parrot is a slim, medium-sized parrot about 25cm long.  Its body is mostly bright green, with a dark blue patch on the crown. The forehead to throat is crimson and there is a crimson patch at the bend of the wing. One of its most distinctive features from a distance is its long (12cm), thin tail, which is dark red, setting it apart from other Lorikeets and Parrots.
The Swift Parrot is found only in south-eastern Australia, migrating to Tasmania to breed in September to January. It is found mainly in southern and central Victoria in winter and also in eastern New South Wales.
Swift Parrot feeds mainly on nectar of the Swamp Mahogany, Spotted Gum, Red Bloodwood, Forest Red Gum,  Mugga Ironbark, and White Box. It can also feed on insects and spiders, as well as native and cultivated fruits.
While on the mainland, they are nomadic, determined by the supply of nectar. During dry years, when the Eucalypts’ flowering is poor, Swift Parrots are forced to travel far and wide to find sufficient food.

Why is it threatened

Loss of key Eucalypt habitat and foraging tree species contributes to the population decline of the species. Lowland fertile woodland areas have been cleared for agriculture and residential activity, reducing the extent of foraging habitat.
High fire frequency and drought conditions can impact on food resource availability.  Swift Parrot are subject to predation by feral animals and exclusion from food sources by other aggressive bird species.

How you can help

The project will be undertaken in collaboration with Birdlife Australia and the Department of Planning, Industry and Environment.  A key outcome of the project is to increase understanding and capacity of the community to be able to identify the Swift Parrot and assist in recording sightings in the Central West.