On the North Coast, our NRM Projects are delivered by our Natural Asset Protection team, and cover a wide variety of biodiversity, threatened species and environmental conservation projects.

Scroll through to view our NRM blog below, or use the menu to learn more about some of these projects and programs:

Bushfire Recovery for Wildlife and Habitats

As part of the Bushfire Recovery - Eastern Freshwater Cod Project, the Department of Primary Industries - Fisheries and Local Land Services have designed and are trialling ‘natural’ versions of artificial spawning habitat. These trials are taking place in preparation for installing ‘spawning boxes’ in the wild. Although some nesting behaviour (guarding and cleaning) occurred in the trial, only limited spawning eventuated last year at Grafton Fisheries Centre.

Interestingly, once female Eastern Freshwater Cod mate and spawn they leave the eggs in the care of the male. Male fish then aggressively guard the eggs until they hatch and protect young cod until they are old enough to fend for themselves.

Over the course of 2022 the Fisheries and Local Land Services team will work with a range of experts to refine the design of the artificial spawning habitat, in preparation for deployment at selected locations later in the year. 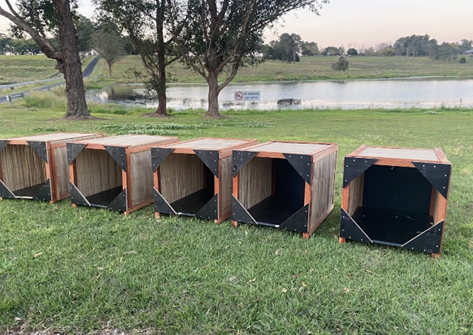 Below: Concept drawings for cod/spawning boxes

We're now well into Spring, and for many of the North Coast’s wildlife residents and visiting migratory species it's a time of heightened activity.

Reptiles are re-energising with the warmer weather and longer day length and can be seen basking in the sun, while mammals and birds are busy looking for mates, building nests and dens, rearing young and foraging for food. Turtles seem to appear everywhere with the first rain and are often seen crossing country roads while moving between creeks and dams.

Migratory species have also made their way here to spend summer at their breeding grounds. If you keep an eye and ear out you will notice spectacular seasonal bird visitors including the rainbow bee-eater, spangled drongo, channel-billed cuckoo and dollarbird. With this much wildlife active and on the move, it's unfortunately also a time when many will be adversely impacted as they try to move around and go about their seasonal routines. However, there are things we can all do to ensure the safety of our native fauna and protect them against these threats.

Arboreal mammals such as koalas and possums and terrestrial species such as bandicoots, wallabies and pademelons are particularly vulnerable to road strikes from vehicles. Many birds such as swamp hens, rails, pheasant coucals and quail - which are often well-hidden in long roadside grass and vegetation before crossing onto the road - are at risk. In many cases, there is little reaction time for a driver to avoid hitting wildlife, but if you unfortunately do – and if you can safely attend to the injured animal we encourage you to seek help. Some of the supporting services on the North Coast are linked below. As always, drive to the conditions and take extra care where you know wildlife commonly cross roads or use roadside habitat. For example dawn and dusk are key times to be extra vigilant for kangaroos or wallabies grazing on the roadside.

Studies have shown that driver awareness measures (signage, road painting etc) have a negligible effect on reducing road-strikes. However, reduced speed is shown to reduce the severity of impact to wildlife and overall mortality. The message here is to drive cautiously and – if safe to do so – reduce your driving speed in at-risk areas and situations.

Now is also a timely reminder to all cat and dog owners to ensure their pets are always under control when outdoors. Domestic pets continue to pose a threat to our wildlife, particularly in the interface where our towns and villages meet the surrounding bushland. If your pet injures wildlife, please contact a wildlife rescue service for assistance. Better still, familiarise yourself with basic wildlife first aid as it can be some time before expert help can be reached. In the long-term, you may like to consider becoming a wildlife carer yourself - a fulfilling experience!

So, as Spring warms into Summer, we hope everyone is getting out and about across our beautiful North Coast landscapes. Enjoy the chance to spot wildlife on the move and do your bit to keep them safe.

The Upper Coldstream Biodiversity Hotspot is part of Yaegl Nation and centres around Pillar Valley, near Grafton NSW. The project area spans the catchment of the Coldstream River at the eastern edge of the Clarence River floodplain.

This area is referred to as the Upper Coldstream Biodiversity Hotspot because it contains some of the most diverse eucalypt forests and forested wetlands in the world. It supports an exceptionally high diversity of native plants, with over 1100 species recorded so far, including over 110 threatened species. The large forested area provides the habitat required by iconic animals such as the coastal emu, forest owls, gliders and even giant dragonflies. Watch this 2017 Nature Conservation Council Video to see some of the unique values of the area.

This project continues the work carried out by North Coast Local Land Services and the Nature Conservation Council since 2013. The Clarence Environment Centre engaged over 40 landholders in priority weed management activities which are undertaken by bush regen teams. The key to this project is to focus on controlling small weed outbreaks in areas that have a high recovery potential and to contain the “basket case” areas so they don’t spread.

Infill planting is undertaken by Pillar Valley local Pillar Pete from Yuraygir Landcare. The focus of these plantings includes tree species that are currently under-represented, having undergone historic harvesting and land management activities.

One of the highlights has been the involvement of the Yaegl Wadyarr land management team in carrying out weed control and installing nest boxes on country. We are honoured to have played a role in facilitating the Team's return to country through paid employment. We have begun to explore further opportunities that native title rights might offer in the future use and co-management of country.

Though impacted by drought, fires and the pandemic, many animals appear to have migrated to this area where food and safe shelter can be found. This has led to a fresh resolve by landholders and partners to continue to protect this magnificent and unique area.

Spring is in the Air!

Two of the Northern Rivers most unique aquatic animals - the platypus or Mulluny (Ornithorhynchus anatinus) and Eastern Freshwater Cod or Gurruuja (Maccullochella ikei) - are now using the warmer months of spring to mate and reproduce.

With our two ambassadors for World Rivers - or Bindarray - Day, lets turn the den lights on, nestle down into some light reading and learn a little about how these two iconic species rely on healthy rivers in our part of the world.

The Eastern Freshwater Cod is a threatened species under both NSW and Commonwealth Law. Their breeding season coincides with river closures where fishing is prohibited from 1 August through to 31 October. The closed waters include:

This closure aims to protect Eastern Freshwater Cod when they are most vulnerable. Brooding male fish aggressively guard their eggs and larvae from predators until they are old enough to disperse and fend for themselves. Eastern Freshwater Cod nest - or wiiri - sites have been observed under large boulders and bedrock shelves, at depths from 1-4m. The nesting site is heartily cleaned by the male for up to 1 week prior to spawning with the nest only entered by the female for the purposes of spawning.

The platypus, however, is almost the opposite. While the males retire to their year long dens, female platypus make elaborate preparations to care for their young.

In the weeks following mating the female constructs a complex burrow - sometimes over 20m long. She softens the floor of the burrow with dead wet leaves and at the end of the tunnel forms a nest of bedding material comprised of more leaves and reeds.

The young will remain in the burrow for roughly four months before emerging into the nearby stream.

Both animals rely on healthy aquatic habitats to complete their life cycle. In the northern rivers that equates to:

These habitat attributes then provide for the necessary food sources these animals rely on with the common target being the humble crayfish – a favoured delicacy of both species.

Below you will find a couple of fantastic videos from Brett Vercoe - Former Marine Park Officer at the Solitary Islands Marine Park.