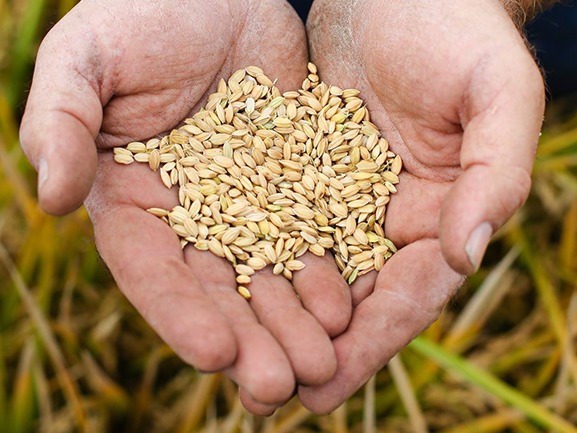 I was speaking recently with a rice grower from the western Murray Valley who was bitterly disappointed with his rice yields last season.  In hindsight, he thinks that his crop was too late getting to panicle initiation, probably over-fertilised, possibly too thick and his water wasn’t deep enough at microspore.

He will be growing rice again this season and needs to ensure a good result.  My concern is that he, like many other growers, may overreact to last season to the detriment of his next crop. In my experience, the previous year’s situation is uppermost in growers’ minds when planning the next season.

An over-reaction to last season may lead to the crop being:

NSW Department of Primary Industries has published growing guides for each rice variety that indicate the recommended sowing times.  Importantly, in most years sowing too early can lead to a greater risk of cold damage than sowing marginally late.

We don’t know when the best time will be to sow your crop this season.  We do know, however, that if you sow within the recommended period each year, you will encounter less cold damage than if you always sow earlier (or later) than recommended.

The aim of sowing within the recommended window is to have crops reach panicle initiation (P.I.) in early January and microspore (the cold sensitive period) in late January to early February.  Cold night temperatures are more common in early to mid-January than in late January and early February.  Sowing too early increases the risk of cold damage.

Rice growers know that excess nitrogen increases the cold sensitivity of their crops.  Many had well-grown crops last season that failed to yield so are considering reducing the nitrogen rate this season.  The danger with this approach is that lowering initial urea rates too much will irreversibly limit the crop’s yield potential.

Mid-season top dressing at P.I. can effectively top-up the nitrogen in crops but cannot make up for significant nitrogen deficiencies.  The aim is to have a nitrogen uptake at P.I. of at least 100 kg/ha.  Crops with less nitrogen uptake at this stage cannot fully recover, and their yield will be reduced compared to crops with adequate P.I. nitrogen.

If your initial nitrogen rates have been excessive so that P.I. nitrogen uptake is greater than 150 kg/ha, then certainly reduce them to more moderate levels.  However, if they have been correct in previous seasons, then do not reduce them significantly.

Watching a good, thick stand of rice emerge and establish is very satisfying.  However, objective data has shown that crops do not need to be as thick as most growers like them to be.

An even plant stand as low as 50 plants/m2 will not suffer any loss of yield potential.  However, I am not suggesting that you aim for plant populations this low, but aiming for a stand of about 150 to 200 plants/m2 is adequate.  Sowing to achieve thicker plant stands does not benefit and may, in cold seasons, be a disadvantage.

Sowing Reiziq at 150 kg/ha sows about 500 seeds/m2, which is not needed.  If only 50 per cent of these seeds establish, the crop will still be much thicker than required.

Most of the rice growers that I know don’t count seedlings at establishment time (some do), they just eyeball the crop to see if it looks adequate.  However, it is well worthwhile doing establishment counts to re-calibrate your eye.

Deep water at microspore is essential to minimising cold damage.  The grower I spoke with admitted that he had not measured the effective bank height last season nor topped them up prior to sowing his crop.  His banks then failed in January when he attempted to increase water depth.

Rice bank maintenance is essential and hopefully has already been undertaken for the coming season.  However, if it has been overlooked, there is still a small window of opportunity to address it.

Last season was abnormally cold and led to many disappointments.  We are unlikely to have a repeat of those conditions this season, but every Murray Valley grower (especially those in western Murray Valley) needs to manage their crop to minimise the impact of the mild cold that can impact every season.  This is best achieved by: