One of the few downfalls of the cracking season much of the Central West has enjoyed in 2021 is the risk that legumes in our pasture present in terms of bloat risk. Bloat can be a devastating issue for graziers across the Central West as it is difficult to assess the risk of bloat, as well as, few management options available. Bloat presents producers with a dilemma in that to achieve high growth rates in their animals, high quality pastures are required. Unfortunately, our most productive pastures are often the ones with a high bloat risk.

Bloat is a gas accumulation in ruminant animals associated with high quality, protein rich pasture. Also known as frothy bloat, it occurs when a layer of foam occurs in the animal’s stomach and prevents gas from escaping (i.e., belching). This trapped gas in the stomach builds up quickly causing asphyxiation/suffocation and rapid death. Legumes such as clovers, annual medics and lucerne pose a high risk although there has been cases of bloat reported on forage cereals like wheat and oats. Bloat can affect all ruminants however cattle are more prone to suffer from the disease than sheep.

Treatment is usually very reliable for mild cases and comes in the form of a bloat oil drench (vegetable, paraffin etc.), with veterinary intervention required for more severe cases. However, due to the rapid onset of death, the first sign of bloat is usually dead animals in the paddock. Therefore, timing is of the essence with regular monitoring required to ensure early detection of bloat signs.

Reliably predicting bloat risk of a pasture is extremely difficult so farmers must make other decisions to try and reduce their risk of bloat in the short term:

Long term, one of our best options to manage bloat is to modify our pasture composition. Perennial grasses have a very low bloat risk so it is important that they comprise at least 60-70% of the total dry matter of our pasture. However in situations where we want to drive productivity of our pasture and therefore animal performance, it is important that we have non-grass species to provide improved digestibility and animal growth rates.

An important factor when looking at pasture species for bloat resistance is the levels of condensed tannins present in the plant. Condensed tannins contain components which prevent the formation of foam in the rumen (Jones et al. 1973). This reduces the likelihood of animals suffering from frothy bloat, even in situations where animals have access to bloat causing legumes (McMahon et al., 2000). The levels of condensed tannins are important as tannin levels which are too high may reduce herbage intake and animal growth rates (Kelman & Tanner, 1990). Monogastric animal species like horses may also be negatively impacted by tannins. 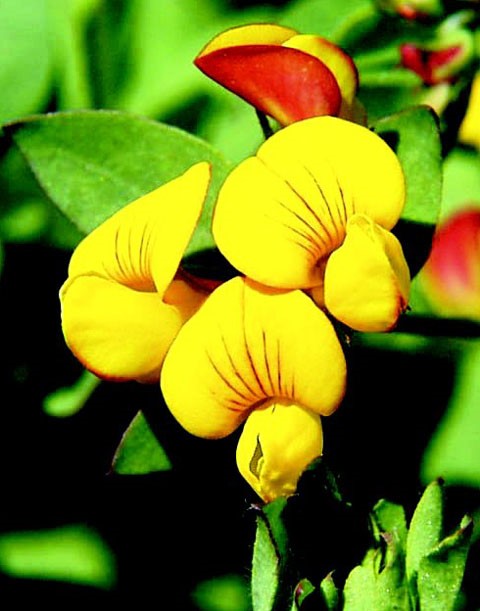 Birdsfoot trefoil is a perennial growing pasture legume with tolerance of moderately acidic soils and provides quality feed in winter and spring. It does have a high annual rainfall requirement of 650mm so is limited to the slopes and tablelands or as an irrigated pasture. It is also prone to overgrazing so needs to be rotationally managed. Birdsfoot trefoil contains condensed tannins and so is a non-bloating legume (Mcmahon et al., 1999).

Birdsfoot trefoil in Australia was investigated thoroughly in the mid-2000s with breeding programs set up with the DPI which developed and release of several varieties (Primefact 822, 2008) but has a low suitability to the Central West due to a high rainfall requirement. Currently it is also very hard to source seed as seed production can be unpredictable.

High dry matter yield, deep rooting ability and a multitude of varieties suited to different flowering windows make Arrowleaf clover a good option for producers in the Central West. Its erect flowering and aerial seeding habit make it an ideal candidate for “nursery” plantings on farm to bulk up farmer seed stocks as it is readily grown and harvested with conventional equipment. Varieties like the early maturing, “Cefalu”, mid/late maturing “Zulu” and late/very late “Arrotas” allow graziers to pick a variety that suits their rainfall and climate. Arrowleaf also contains a high level of hard seed which ensures pasture longevity and protects against false breaks in autumn.

Arrowleaf clover contains compounds that behave similar to condensed tannins (Campbell, 2008) and is deemed low risk for bloat so is one of the few temperate legume species in the Australian market which might be considered “bloat-safe” (Primefacts 102, 2005). There have been few reported cases of bloat on Arrowleaf pastures however, there is a lack of scientific research to back this up in recent years. Arrowleaf is typically used in mixed swards in conjunction with other legumes and so should be managed to avoid very high-risk scenarios.

A review by Wang et al (2012) of work in Canada still rated Arrowleaf as a moderate risk. This is backed up by a thesis paper written by Watts (2019) that showed housed animals at CSU fed arrowleaf clover alone at a vegetative stage caused bloat. Caution is therefore still advised, as with most lush legume pastures. 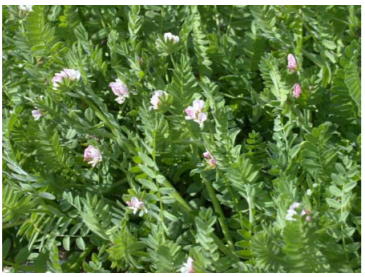 Serradella is adapted to deep, well drained, sandy soils with low pH and low fertility levels. It will also tolerate moderate to severe aluminium and manganese levels. Yellow serradella has been known to have a higher percentage of hard seed with pink or French serradella recognised as soft seeded. They were generally sown together with yellow used for longevity and pink to provide short term productivity. There are newer varieties of pink serradella out such as “Margurita” which have been bred to have a higher proportion of hard seed and therefore persistence in pasture.

The benefit of serradella in general over typical sub-clover is that it is more indeterminate in its growth. This means that it will continue to grow and flower longer into spring and summer and is more responsive to rainfall at this time of year.

Both serradellas contain condensed tannins and are non-bloating legumes (Species for profit, 2006). Work from Canada by Berard et al. (2011) showed serradella to possess roughly half the levels of condensed tannins as birdsfoot trefoil representing a low, but still possible bloat risk. Serradella does have other animal health issues such as photosensitisation which can cause damage to extremities and in severe cases, death. 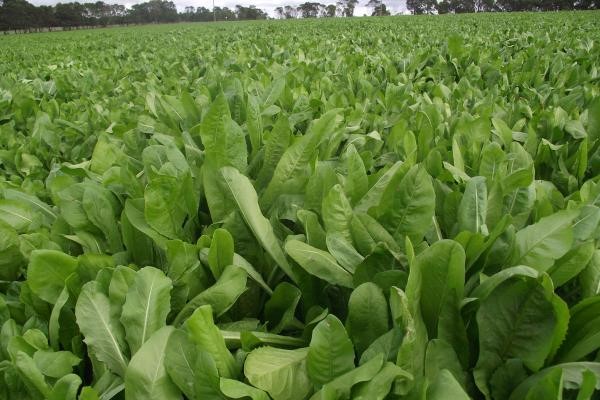 Chicory is a warm season herb with very high digestibility and with high animal growth rate potential. The perennial type (e.g. “Puna II”, “Choice”) is likely to persist for 3-4 years in the Central West and with its tap root, is drought tolerant, however needs to be carefully managed to ensure longevity. It is also more tolerant of acid soils and aluminium than lucerne, so it is a good replacement in harsh soil conditions. The bi-annual type (e.g., “Chico”, “Forager”) is for short term forage cropping situations and will only persist for 12-18 months at most. Chicory is not a legume so it does not fix nitrogen but, is a good option as a companion species for lucerne stands or in shorter term perennial pastures. It should be noted that it is a poor component in hay as the leaf will go dark and mouldy when drying down while making silage is still an option.

Importantly for producers, chicory has been shown to be a non-bloating pasture (Barry, 1998). It has also been shown to reduce incidence of intestinal parasites and worms when compared to a control (Barry, 1998). While there have been no recorded cases of animals suffering bloat on a chicory pasture in Australia, as chicory will usually be sown in a mix with other bloat causing pastures, caution is still warranted.

A short-lived perennial herb which grows year-round and is well suited to acid soils. Suited to areas with annual rainfall above 550mm, plantain can be expected to persist for 2-3 years in the Central West. It offers high growth rates and palatability for stock while leaves are young and fresh. It does decrease in palatability when more mature, with producers having mixed results if grazing management is not ideal. Older varieties like “Tonic” performed well in spring and summer while newer varieties like “Captain” have been selected for increased winter growth.

While plantain contains tannins which may lead to reductions in bloat (Stewart, 1996), there is a lack of evidence to support low bloat risk. Perhaps tellingly, seed sales companies do not promote plantain as being bloat free.

There is a real lack of scientific evidence to support other species being used as non-bloating pasture. For example, in the US, berseem clover (Trifolium alexandrinum) is routinely used as a non-bloating pasture however, limited uptake and research has been observed here in Australia. This is perhaps due to the perception that it is a poor option for grazing enterprises and limited to fodder only production.

Tropical legumes like sulla, desmanthus and desmodium also contain condensed tannins and been shown to be non-bloating (Wolfe et al., 2008). However, the usefulness of these species in our peak bloat period of late winter and early spring is questionable, as their growth is minimal in the colder months. There may be a fit for these in mixes with lucerne, but up to date research and demonstrations are required. Another tropical legume called sainfoin is again routinely used in the States but has not been adopted by the Australian market. Research in the 80’s suggested it may have been able to replace lucerne as a non-bloating species but has never lived up to this expectation. Low palatability may be to blame.

The hard-seeded, legume biserrulla, is similar to serradella in its persistance and tolerance to acidic, infertile soils. There is some claims of biserrulla being a low bloat risk (Watts, 2019) however a real lack of evidence, both domestically and internationally, would suggest producers concentrate on other species.

There has been a real lack of research into bloat in recent times despite the hefty toll bloat can have on producers’ bottom line. Work overseas has revealed that tropical legumes and herbs contain high levels of condensed tannins, however, may not be suited to our region. Research in Australia has revealed that birdsfoot trefoil is also highly non-bloating, but again perhaps not suited to our region.

Arrowleaf clover, serradella and chicory are options that have a low-moderate bloat risk and can also drive production and animal growth rates. However, if producers want to ensure that pastures have a very low or negligent bloat risk, ensuring grass comprises at least 70% of total pasture dry matter is the safest bet.

If you’d like advice on bloat or pasture management, please get in contact with a member of the Ag Advisory team or your district vet. May 2022BackgroundThe NSW Government has committed to extending the NSW Border Wild Dog Fence (commonly known as the...