In the short term, there is the immediate work involved in flood recovery repairing infrastructure such as fence-lines and laneways and ensuring that immediate animal welfare responsibilities such as provision of adequate food, water and shelter are met. Stock that are nutritionally challenged and stressed as a result of the floods, are likely to be more susceptible to a range of diseases

A very important consideration during prolonged flood events is the increased potential for certain livestock diseases. The major diseases during flood for livestock producers to remain vigilant for include:

Steps that producers can take to minimize the risk for these conditions include: 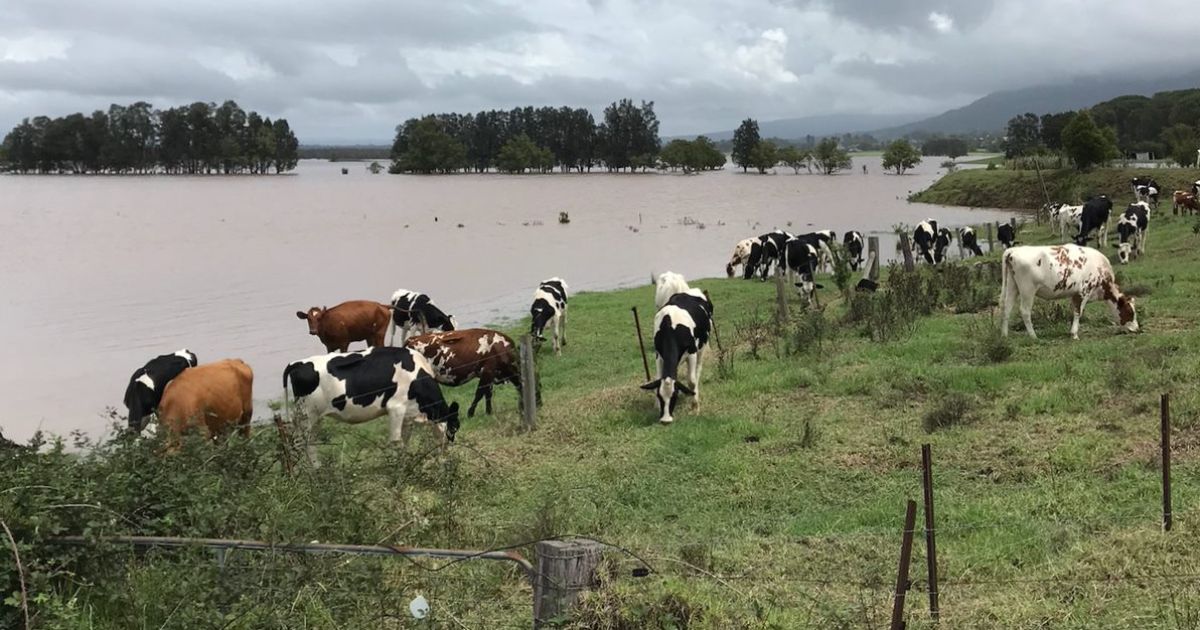 Caring for livestock in times of flood

A flood and its aftermath can pose a unique set of challenges for livestock owners. Initially, it is vital that producers prioritize their immediate animal welfare responsibilities by ensuring stock have adequate access to food, water and shelter. Prolonged wet conditions can lead to significant feed shortages, higher stocking densities and intermingling of groups of animals that would not normally be kept together. Animals are often physiologically stressed, leading to reduced immune system function and have softened feet and skin as a result of prolonged wetting. This combined with better survival conditions for bacteria, biting insects and worm eggs and larvae results in a far higher risk of disease in flood affected stock.

It is important that owners monitor their livestock closely and contact their veterinarian if they detect any signs of disease or illness. Contact your local district vet on 1300 795 299.

During flood times, persistent wetting of the feet can lead to softening of the hooves and therefore an increased risk of trauma such as bruising and penetration wounds. This can also lead to bacterial infections in the foot itself or the skin of the lower limbs. Where possible, efforts should be made to keep livestock on drier ground if available. Repairing track surfaces, preferencing drier ground, ensuring feed rations have adequate fibre content and that supplementary concentrates are introduced slowly can help to decrease the risk of lameness following a flood event. Lame animals should be examined and treated by your regular veterinarian. It is important to ensure that stock are fit to load before they are transported to reduce the risk of worsening lameness and causing animal welfare problems.

Exposure and susceptibility to worm eggs and their larvae are increased during flood times. Common problems are caused by Barber’s Pole, Ostertagia, Cooperia, Lungworm and Liver Fluke. In dry times, most adult cattle have sufficient immunity to resist high worm burdens but high stress and other concurrent disease can suppress this. Young cattle are normally prone to high levels of infestation and therefore need to be paid particular attention in wet times. Gastrointestinal worm infestations can cause scours, loss of condition, and poor growth rates. Barber’s Pole can also cause severe anaemia (pale mucous membranes such as gums, eyelids or vulva) whilst lungworm can cause respiratory disease in addition to reduced production. Where possible, reducing stocking rates can help reduce the risk of disease whilst faecal and/or blood examinations can be performed to assess the level of infestation. Affected animals should be treated with commercial antiparasitic drugs according to the product label.

Leptospirosis is caused by Leptospira bacteria which favour warm, moist environments including water logged soil. Floods that occur in the warmer months are therefore a particular risk. Infection is spread via urine, placental fluid and milk and is contracted through ingestion or contact with wounds or mucosal surfaces including the eyes, mouth and nasal cavity. In young animals, Leptospirosis can present as illness with depression, fever, and bloody urine. Infected older animals can show no signs, but can also experience reduced fertility, late term abortions, still births or reduced milk production in the months following a flood. Treatment of affected animals can be instituted with antibiotics under veterinary supervision. It is important to note that Leptospirosis is a zoonosis meaning that affected animals can spread the infection to humans. Leptospira infection in humans causes flulike symptoms which can become life threatening. Vaccinating cattle with 7 in 1 greatly reduces the risk of disease in cattle and therefore the risk of exposure to humans.

Botulism is another Clostridial disease that poses a significant threat in the aftermath of a flood. The disease is caused by ingestion of Botulinum toxin that can be found in rotting plant and animal material where it is produced by the bacterium Clostridium botulinum. Bones, carcasses, rotting vegetation and silage can all pose a threat and the toxin can be ingested either inadvertently or, in the case of bone chewing, in an attempt to obtain phosphorous in times of deficiency. The toxin causes progressive paralysis which is usually fatal. When first affected, cattle may drool and show paralysis of the tongue. This quickly progresses to being unable to stand and eventually, paralysis of the respiratory muscles leads to death in 1 to 2 days. There is no successful treatment for botulism but the risk an be reduced by avoiding access to rotting plant and animal material. Bone chewing can also be prevented by ensuring adequate dietary phosphorus. Vaccination against botulism offers reliable protection but it should be noted that this is a standalone vaccine and must be given in addition to the standard ‘5 in 1’ or ‘7 in 1’ vaccines.

Flood mud scours is a bacterial infection that can occur when the weather is cool and a large amount of mud covers dry feed. Outbreaks are therefore most commonly seen following a flood in winter or early spring. The disease is usually seen in adult cattle and can cause significant numbers of deaths when an outbreak occurs. When found early, affected cattle can be depressed, off their feed, scouring and have a fever. Often, animals are simply found dead. In the event of an outbreak, affected cattle should be moved to a fresh paddock if possible. The risk of disease can also be reduced by locating supplementary feed away from areas of high mud contamination where practical. Close observation of stock during and after a flood gives the best chance of early detection and treatment and therefore a better prognosis.

Blackleg is a common Clostridial disease commonly seen in cattle in NSW coastal regions and poses an even higher threat during flood times as a result of increased numbers of infective spores in the environment. The disease is usually seen as sudden death in young cattle (usually between 4 months and 2 years of age). It occurs when bacterial spores from the environment enter the body via ingestion or wounds. Affected cattle may show lameness and depression but more often than not they are found dead. If found alive, treatment of affected animals can be attempted with antibiotics in consultation with your regular vet, however the prognosis is usually poor. Blackleg can be easily and effectively prevented by ensuring all stock are up to date with vaccinations.

Dairy herds can experience significant outbreaks of mastitis during and after a flood. Often this is a combined result of increased environmental contamination of the teats as well as the physiological stress experienced during inclement weather, reduced feed intake and in some cases missed milkings. Where possible, attempts should be made to avoid using flooded or muddy laneways and paddocks, particularly in calving and freshly calved cows. Minimizing opportunities for cows to lay down in contaminated yards and laneways before and after milking will also reduce the incidence of mastitis. Daily strip testing, whist labour intensive, can allow early detection and treatment of clinical cases. Dirty udders should be washed and dried thoroughly with a clean cloth or paper towel prior to the application of cups. It is also vital to maintain a diligent and effective teat disinfection regimen.

Also known as Bovine Ephemeral Fever, ‘Three Day’ is a viral disease of cattle that is spread from animal to animal by biting insects and can be prevalent after flood due to boggy ground and standing water. Infection causes fever, lethargy, muscle soreness and lameness which can lead to recumbency. Most cattle recover uneventfully after approximately three days, hence the name. It is vital to both the prognosis and the welfare of the animal that recumbent cattle receive a high level of nursing care or are euthanized on humane grounds. A vaccine against Three Day Sickness is available to aid in prevention although cattle that have been infected and recovered from the disease will usually have lifelong immunity.

Following a flood event, increased fly infestations can contribute to a heightened risk of Pink Eye. The disease is caused by a bacterial infection of the surface of the eye and can result in reduced production, blindness and reduced sale value as well as posing welfare concerns. Affected eyes initially appear watery and may have blue or white discoloration to the cornea or surface of the eye. This can progress to large white to yellow ulcerated lesions into which new, red blood vessels grow, giving rise to the term ‘pink eye’. Topical and injectable treatments are available and should be used in consultation with your regular veterinarian. It is important to bear in mind during a flood event that mustering, yarding or trucking animals results in close contact that can increase the spread of Pink Eye infections. A vaccine is available that can reduce the chances of contracting the disease.

Reducing risks to animal health in times of flood

In summary, adhering to the following points will help mitigate the risks of livestock disease during and after a major flood event, helping to ensure as positive an outcome as possible for all stock owners.

Flooding can introduce new plant species to pastures, and high rainfall can promote growth and abundance of many plants toxic to livestock.

For each new season, it is vital to check changes and address issues to maintain your property. The perpetual land a...