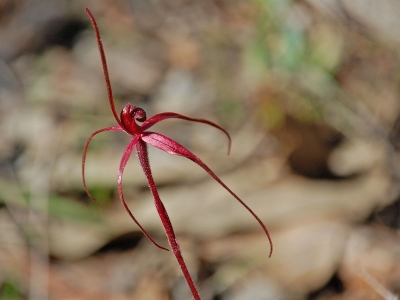 The introduction is part of the NSW Environmental Trust funded Wild Orchids project.

To safeguard these orchid species from becoming extinct, we need to boost the population sizes to at least 3000 plants for each of the three species. To do this, we not only need to increase the abundance of plants within the existing population sites, but we also need to establish new populations.

Woomargama National Park is suitable for crimson spider orchids as it has similar vegetation species composition to the Nail Can Hill and Benambra National Park where the wild populations of Crimson Spider Orchids currently exist. Surveys by the Royal Botanic Gardens Victoria also confirmed that the key pollinator for crimson spider orchids, native Thynnine wasps were present at the translocation sites.

The two Woomargama sites will be planted out with laboratory-grown orchids propagated by experts from the Royal Botanic Gardens Victoria within the next two years. The planting out of the orchids will be a momentous step in the conservation and survival of the endangered Crimson Spider Orchid.