The autumn break: fact or fiction?

What is the autumn break?

Whilst there’s still a bit of summer to play out, producers’ will soon be looking towards the heavens in the hope of getting that highly desirable (but often elusive) ‘autumn break’.

The autumn break is one of the most important events of any year. It is the first significant rainfall event of the winter growing season and signals the start of the growth period. It can ‘make-or-break’ the season for both croppers and graziers and has an immeasurable impact on producer’s confidence and psyche!

So, what is the autumn break?

The ideal level of rainfall in an autumn break event is not the same for everyone – varying between crops and pastures, climate, location and soil moisture profile. But for us in southern NSW, typically the break can be characterised as:

The timing of the rain is important - but so too is the weather following.

A 25 mm rainfall event in March followed by hot, dry weather may not constitute the ‘break’. However, the same rain event in May will very likely be the ‘break’. But remember, the autumn break does not guarantee a successful season; sufficient winter and spring rains are still needed to produce a successful crop or pasture.

Why is the autumn break important?

Typically, cropping producers waited on the arrival of the autumn break before sowing. However, the rise in popularity of minimum-till and no-till farming practices has enabled growers to sow into dry, warm soil. For those growers who dry sow, the arrival of the autumn break causes plants to germinate, utilising the maximum amount of rainfall over the growing season in the crop. The longer the growing period, the greater the potential biomass production and grain yield.

A break that happens late, once cold weather has arrived and potential crop growth slows, can drastically reduce the overall potential of the season.

Also ‘false breaks’ can be quite costly. These are smaller autumn rainfall events that germinate the seed but leave insufficient moisture in the soil to see the germinated plant survive through a dry period that follows. A false break can cause seeds to germinate unevenly, go mouldy, or die. The risks in a false break are higher in minimum or no-till systems and need to be considered as part of the annual sowing program.

The break is crucial to kick off and sustain pasture growth over the winter – one of the key benefits being less reliance on supplementary feeding. A late or non-existent break can simultaneously cause feed prices to rise (given lower feed supply) and livestock prices to fall (producers offload stock, increasing supply into markets). In this case, graziers are faced with a decision to buy in feed, agist or move their stock to other regions with good feed supply, or sell down stock numbers when prices are lower.

The autumn break is also important for irrigators as it starts to ‘wet’ catchments to generate run-off when the winter and spring rains occur. This can mean greater water allocations in the irrigation season, and earlier allocation announcements, providing greater certainty for water availability and crop planting.

So, when can we expect the autumn break?

Often the rule of thumb is the autumn break occurs around Anzac Day in our part of the world. Whilst that’s true in some seasons, by no means is it the ‘norm’!

In reality, the autumn break can occur anytime between February and July – but in some seasons and at some locations, the ‘break’ doesn’t occur at all.

And importantly, the autumn break will not be the result of a change in climatic conditions as such – it will be the result of a significant weather event (such as a cold front, north-west cloud band etc), which can only be forecast 5-7 days out from the actual event.

To put some numbers to it, some analysis of when the ‘defined’ break occurred at seven locations in the Murray region since 1990, based on Bureau of Meteorology (BoM) data is outlined in Table 1. The ‘number’ at each location refers to the number of times the autumn break has been recorded within the two-week period of each month, for the period 1990-2020.

Note that at Balranald and Moulamein, the ‘break’ did not eventuate at all during three of the 31 years in question.

Also, at some locations like Tumbarumba, significant rainfall events can occur before March (like the 120-odd mm which fell in early February 2021). Because of cooler conditions and less evaporation, such events are sufficient to generate early and sustained pasture growth, and certainly sufficient to sow early forage crops.

It is worthy to note there was a ‘run’ of years between 2010-2013, wherein each of these four years, the autumn break occurred in the first half of March, which may ‘skew’ the results somewhat. Whilst such a sequence may be unusual, it could potentially be a new ‘norm’ as well.

Numbers and probabilities can be manipulated to tell a range of stories – but the reality is that (over the last 30 years at least), we have generally received the opening rain of at least 25 mm before the end of April in the eastern half of the Murray region, but it can be a bit later in the west, and sometimes non-existent.

Whilst historical probabilities can provide a useful guide, producers should also use other sources of information to help them in their decision making – use information from the BoM (such as the three-month outlooks – see the current outlook in Figure 1), climate indicators such as ENSO (El Nino Southern Oscillation index) and ‘gut feel’ to implement your strategies based on the best information you have on hand at any particular time. Existing soil moisture conditions are another vital element to any decisions as well.

Figure 1. Rainfall – the chance of above-median rainfall for NSW – February-April, 2021. 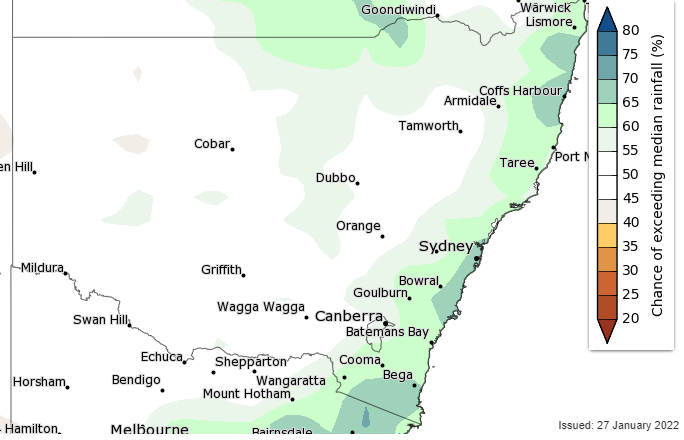 Importantly, have some ‘fall back’ positions or contingencies in place should your plans not come off – to be forewarned is to be forearmed!

Whilst the autumn break is an important ‘event’, it doesn’t tell the full story.

The effectiveness of that first significant rainfall event is enhanced by receiving good follow-up rainfall to ensure newly germinated pastures and crops have adequate moisture to establish and continue to grow.

This can be a real issue for those early season breaks – where rain falls in March when conditions remain warm, and follow-up rainfall is not received. The old adage that the timing of the first autumn rainfall is not as critical as the second rain holds very true!

However, you view the magical ‘autumn break’, producers would be wise to consider what the long-term trends and projections are for autumn rainfall in our part of the world. Build your farming systems and operations around these. But also, be prepared, and agile enough to respond to the opportunities which autumn rainfall events provide.