Have you see the fan-tailed cuckoo?

The fan-tailed cuckoo (Cacomantis flabelliformis) is a fairly rare sight across the Murray region. While sightings have been recorded across most of the region, counts of fan-tailed cuckoos in formal bird surveys are relatively low compared to other local birds.

Fan-tailed cuckoos are partly migratory. Some stay in the region year-round, whilst others move north and inland during autumn and winter. They breed from July to January, which is when they are more likely to be seen.

As with most other Australian cuckoos, the Fan-tailed Cuckoo is a brood parasite or nest-raider. Brood parasites are fascinating if a somewhat cheeky, group of birds. Instead of going to the trouble of building their own nests and raising their own young, they lay their eggs in the nests of other species of birds and leave them to raise their chicks. Host species include flycatchers, fairy-wrens, scrubwrens and thornbills, particularly the Brown Thornbill. A single egg is laid in the nest, and one of the host's eggs is removed. The young cuckoo generally hatches earlier than the host's eggs and then proceeds to eject the other eggs or hatchlings. The seemingly unaware foster parents then rear the cuckoo chick.

Many people can recognise the Fan-tailed Cuckoo by its 'peeeer' descending trill. This simple trilled song is a familiar sound of spring and summer within the breeding range of this species. They also make other calls, including soft, mournful 'p-whee' whistles, often when another bird is nearby. Female Fan-tailed Cuckoos can also make loud, shrill 'chireee' calls, sometimes in response to the call of a male. Although Fan-tailed Cuckoos call most frequently in the breeding season, they can also be heard at other times in the year and even at night.

How can you tell one type of Cockoo from another? Fan-tailed Cuckoos are distinguished from Brush Cuckoos (which have a grey eye-ring) and Pallid Cuckoos (which are paler and lack warm breast tones).

Find out more about the Fan-tailed Cuckoo 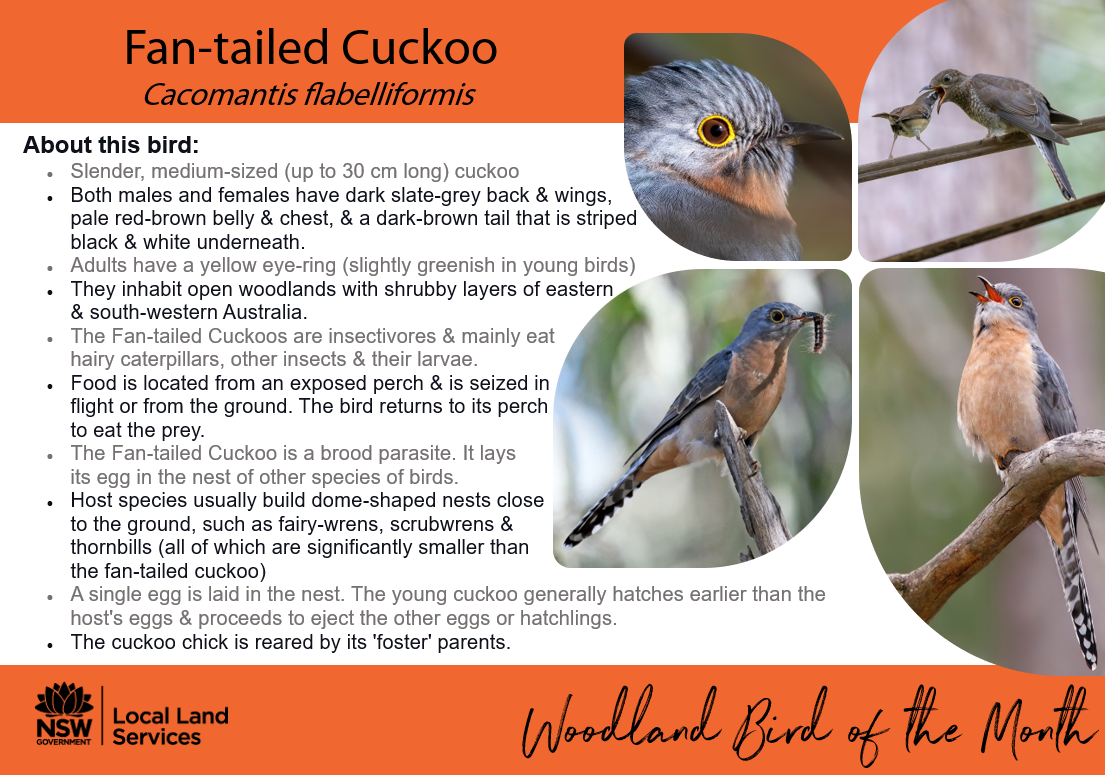 Clockwise from top left 📸 thanks to: