Applying nitrogen – More than one way to skin a cat

Applying fertiliser is an investment with the aim being to increase crop yield potential or grain quality through improved nutrition. The old sentiment “you only get out what you put in” heavily applies. I encourage growers to determine their nitrogen (N) budget at the beginning of the season and determine how much will be required to achieve their desired yield and protein concentration. Then with a soil test, determine what their fertiliser requirement will be so that “mining” of the soil nutrient bank does not occur.

Nitrogen can be applied in multiple ways. This can happen prior to sowing, through broadcasting on a fallow paddock then incorporating with cultivation or Incorporated By Sowing (IBS). At sowing, fertiliser can be added with the seed or using a double chute system, where fertiliser can be banded below or to the side of the seed. After crop establishment, fertiliser can added through top dressing the crop and relying on rainfall for incorporation. Another option is Mid-Row Banding (MRB), where every second row is inserted with a fertiliser band under the soil surface.

This article focuses on improving N levels primarily with urea. Recent studies indicate that many producers in our region are missing out on yield potential in crops such as canola and cereals, due to insufficient N.

In a perfect world growing a crop would entail placing all fertiliser requirements upfront with the seed at sowing and expecting that to meet all nutrient requirements. The main reason this does not work is crop safety. When using significant rates of fertiliser, sowing rigs need to be capable of placing fertiliser far enough away from the seed to avoid ‘burning’ seedlings. A process where the salt concentration of the fertiliser reduces the osmotic potential of seedlings. Stopping them from accessing soil moisture. Ammonia toxicity is another concern. Ammonia based fertilisers, like urea, are broken down in the soil and release ammonia gas. This can build up in concentration, impacting germination and early seedling development. Particularly in broadleaf crops such as canola as high exposure to their taproots is often lethal. Studies have shown the toxicity zone to be 1 to 5 cm from the placement of the fertiliser. Generally, larger seeds have less damage potential than smaller seeds.

Below demonstrates the ranking of lowest tolerance to fertiliser to highest tolerance. Canola tolerating the least amount (Figure 1).

Figure 1. Ranking of crops by their tolerance to ammonia based fertilisers to from lowest (left) highest tolerance (right)

Deep banding of fertiliser during sowing can assist in minimising crop damage by creating distance between the seed and fertiliser. This option is useful to a point, as it is dependent on crop selection and fertiliser concentration. Pan et al (2016) demonstrated the risk of deep banding urea at 90 kg/ha in canola during sowing. As Figure 2 indicates, root growth was severely inhibited when the tap root came into contact with the toxicity zone from the urea, compared to a control treatment. Even with a 5 cm gap between the fertiliser band and the seed. Banding fertiliser at sowing generally requires a double chute system with a high draft and breakout force to deal with the increased placement depth, which may be a limiting factor. To provide the best opportunity for crops to achieve their yield potential, while also reducing the risk of seedling damage from fertiliser, incorporating N outside of sowing is recommended. Broadcasting fertiliser before sowing is an option. Decent rates of urea can be applied and then IBS, reducing risk of crop damage in a similar way to the use of pre-emergent herbicides. Tynes would be more appropriate than disc seeders in this circumstance, as they would achieve adequate soil throw out of the seed bed. Additionally, lower fertiliser rates could be used and then incorporated with cultivation.

Top dressing is implemented by a number of growers in our region. Often this is to mitigate the risk and expense of applying a large amount of fertiliser upfront at sowing, particularly if the season turns poor. Leaving a significant amount of fertiliser unused in the soil and at risk to some loss to the N cycle, a point discussed a little later.

N when top dressed is generally applied in the form of urea, as it can be applied in the largest swarf. In cereals, applications of fertiliser can occur at different growth stages depending if your aim is to increase yield or grain protein concentration. As a rule of thumb applications from tillering through to the start of stem elongation (GS21-31) impact yield and can lead to a dilution in grain protein concentration. On the other hand, applications from flag leaf emergence (GS39) onwards heavily impacts grain protein. It should be noted that applying N after flowering (GS60) has limited effectiveness and is not recommended.

Top dressing requires a significant rainfall event to incorporate N into the root zone. Some suggest, at minimum 10 mm but this dependant on soil type and the type of rain received. For example 10 mm in the first hour, is not as beneficial as 10 mm over an entire evening. Inadequate amounts of rain cause the fertiliser to fail to move off the soil surface and it begins to breakdown, gassing off into the atmosphere, this is called volatilisation. In-crop, the degree at which this occurs is heavily influenced by soil moisture at the time of application and if adequate incorporation has occurred within 2 to 3 weeks. The greater the soil moisture at application the increased risk of volatilisation. Other influences which impact risk include soil pH, temperature, wind speed and product selection.

Studies have found that applying N below the soil surface can reduce the risk of volatilisation. This method allows for applications of N at required growth stages, similarly to top dressing, but with a reduced risk of volatilisation. MRB uses a three-point linkage mounted banding bar with twin disc openers on every second row, and press wheels to close the furrow (Figure 3).

GPS guidance is essential and urea is placed 25-35 mm below the soil surface. Another benefit of this process is the reduced requirement for follow-up rainfall compared to top dressing. However, this system may be limited by narrow row spacing and the requirement for new equipment. 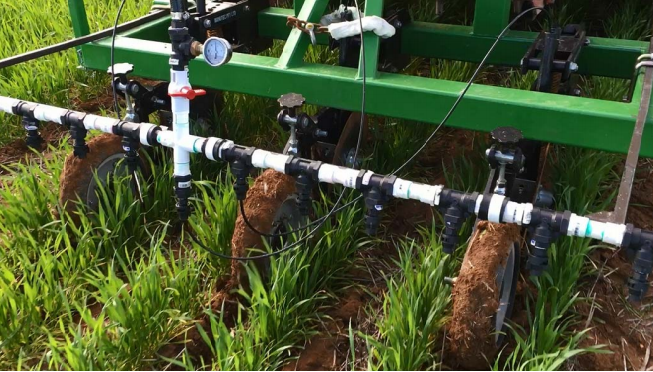 What happens to unused N?

As well as ammonia volatilisation, N can lost from the soil in several different ways including nitrate leaching and nitrate denitrification. In the past these processes were thought to cause heavy losses of N (>50%) to applied fertiliser. Recent studies have actually found that the loss of N from unused fertiliser is a lot less significant than first thought.

One experiment from Grain Orana Alliance (GOA) observed the impact of large rates in canola and how this impacted the following wheat crop. Wheat yields were found to increase with each increase of N applied during the previous season. Interestingly, this was reflected in the gross margin. With each increase in N showing an increase in net profit. Major increases were observed between 50 and 100 and then 150 units of N/ha (109 kg, 217 kg and 326 kg of urea per ha respectively). While some of these application rates are extreme they do demonstrate that in a lot of our cropping systems, N is limiting yield potential. Particularly since 80 kg/ha of MAP (8 units of N/ha) at sowing and top dressing with 100 kg/ha of urea (46 units of N/ha) is not uncommon in our regions cropping systems.

Though there may be a risk for over fertilising with higher rates, this has been found to be utilised by the following crop and is reflected in the following gross margin.

How N is applied to a crop is determined by access to equipment, when fertiliser is available and a grower’s aversion to the economic risk of application. However it is applied, it should be done as efficiently as possible to ensure that the investment is made worthwhile. By taking into account the potential for N loss, crop type and crop fertiliser requirements.

Schwenke, G (2014) Nitrogen Volatilisation: factors affecting how much N is lost and how much is left over, (Grain Research & Development Corporation: Canberra)

Schwenke, G, Perfrement, A, Manning, B, McMullen, G (2011) Nitrogen volatilisation losses – how much N is lost when applied in different formulations at different times, (NSW Department of Primary Industries: Sydney)

How to know when to sow

By Tim Bartimote - Cropping OfficerWith widespread rain across our region we are seeing increase...

Keep an eye on the mercury when spraying in-crop

Tim Bartimote | Senior Land Services Officer - CroppingAs we move forward in the growing season it is important to b...