Lucerne is a versatile and productive fodder plant suited to dryland, supplementary irrigated and fully irrigated pastures.  It can also be successfully grown on a range of soil types from light loams to heavy clays, provided there is adequate surface to ensure water does not pond.

Lucerne has been included in four irrigated pasture legume trials that Murray Local Land Services (MLLS) has been conducting with funding provided by the Australian Government National Landcare Program. The trials are located at Berrigan, Deniliquin, Caldwell and Noorong. They have confirmed the value of lucerne and the management requirements to ensure its persistence.

The following graph shows the annual production from lucerne, three subclover varieties, arrowleaf clover and balansa clover in the second year of an irrigated pasture legume variety trial at Noorong (near Swan Hill) in the western Murray Valley.  The trial is on a heavy, grey clay soil laid out to border check irrigation and watered twice in the autumn and once in the spring. 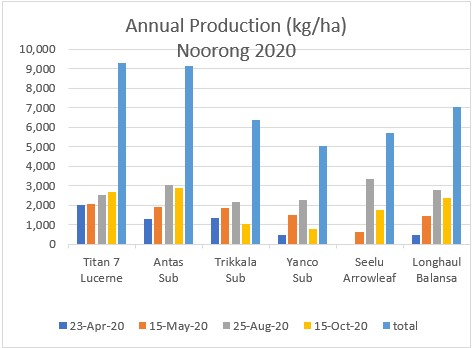 The lucerne production, from March to October, was similar to the best subclover variety and substantially more than most other annual legume species. It also provided the highest amount of autumn production, which is usually the main feed-gap period on mixed farms. Production that occurred after mid-October was not measured.

A disadvantage of lucerne however is its slow growth in the establishment year.  Production of lucerne in year one was substantially lower than that of most annual species, as indicated in the following table:

One of the trial sites at Caldwell was watered in the establishment year, but not in the autumn or early spring in the second year.  At this site, only two pasture legumes, lucerne and Antas subclover, produced enough biomass to measure. The following table shows the production data from this site:

Table 2: Biomass in the second year without irrigations

The following photo, taken in May 2020, shows a plot of Antas subclover in the foreground and a plot of lucerne behind it.  It was taken at the trial site that was not watered in the second year. The remainder of the area was sown to a range of annual pasture legumes the previous year, but most did not regenerate in the second year. 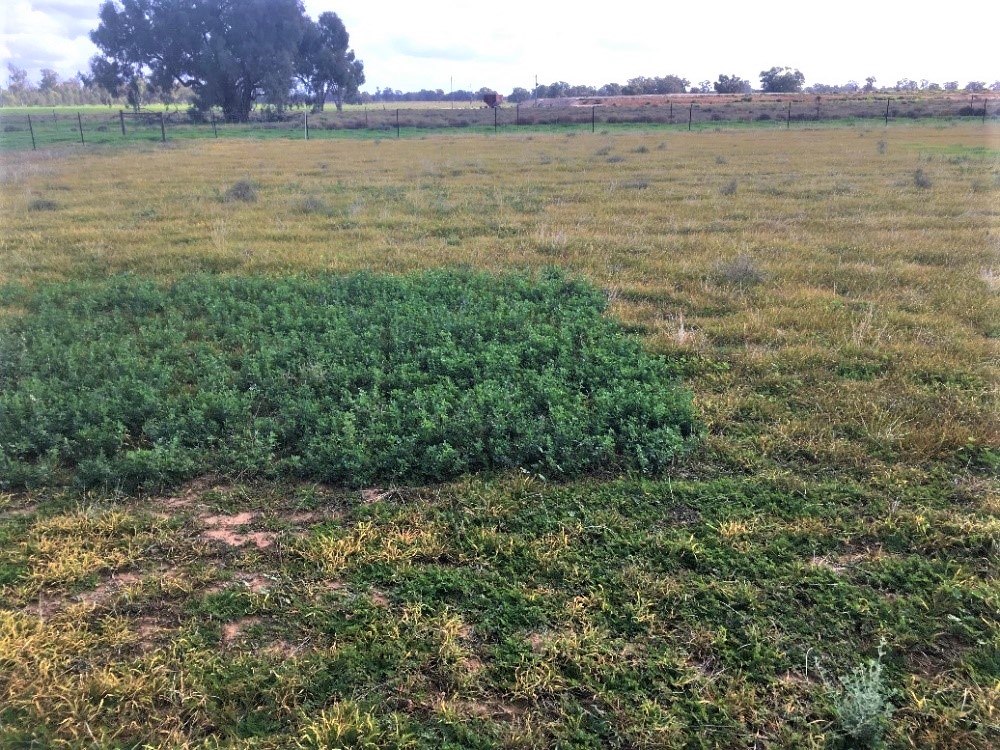 Photo: Lucerne growth compared to annual clovers when not irrigated

Most of the key principles for establishing lucerne are well known.  Most landholders know to select a paddock free of broadleaf weeds, sow the seed very shallow, protect the seedlings from insects (particularly red-legged earth mites) and avoid moisture stress and waterlogging.  What is not always understood is the specific seed inoculation techniques for irrigated pasture legumes, including lucerne.

Most seed is sold as pre-inoculated rather than bare.  Pre-inoculation of seed is effective, but only if it is sown within six weeks of coating and the seed has been stored in a relatively cool environment.  A local study of effective inoculation of annual pasture legumes indicated that it was only successful in about 20 per cent of paddocks as the majority had not been sown within the allowed window.  There has not been a similar evaluation of local lucerne crops, but the principles of inoculation remain the same as for the annual legumes.

If seed that was commercially pre-inoculated more than six weeks prior is to be sown, then it is worth inoculating it with Group AL inoculum at sowing.  The use of peat inoculums is very effective, but only if the seed is sown into moist soil.  If the seed is sown into dry soil prior to watering, the rhizobium bacteria in the peat inoculum will desiccate and die before inoculating the lucerne roots.

When sowing seed into dry soil, the use of a dry inoculum is the most effective.

Lucerne in the Berrigan trial (on a red loam soil) was killed out in the third year.  Prolonged rainfall following an autumn irrigation led to severe waterlogging that killed the lucerne but not the annual clovers.

Correct grazing management is also essential for lucerne persistence.  Lucerne can withstand heavy grazing provided it can fully recover between grazing events.  Once it has been grazed, it needs to regrow to either early flowering or to when new shoots start to emerge from the crown.  During the resting period between grazings (or cuttings) the plant replaces root reserves in preparation for the next grazing.

Lucerne is best sown into a paddock that is free of broadleaf weeds, especially vigorous weeds such as capeweed and Paterson’s Curse.  It usually takes two or more seasons to get these weeds under control, so careful preparation is required to improve the chance of a successful establishment.

Paddocks that are relatively free of broadleaf weeds are best fallowed from spring through to sowing time in autumn.  Fallowing is beneficial for irrigated stands and essential for dryland stands.

The NSW Department of Primary Industries has a number of useful information sheets that can be downloaded from their web page. Visit www.dpi.nsw.gov.au/agriculture/pastures-and-rangelands 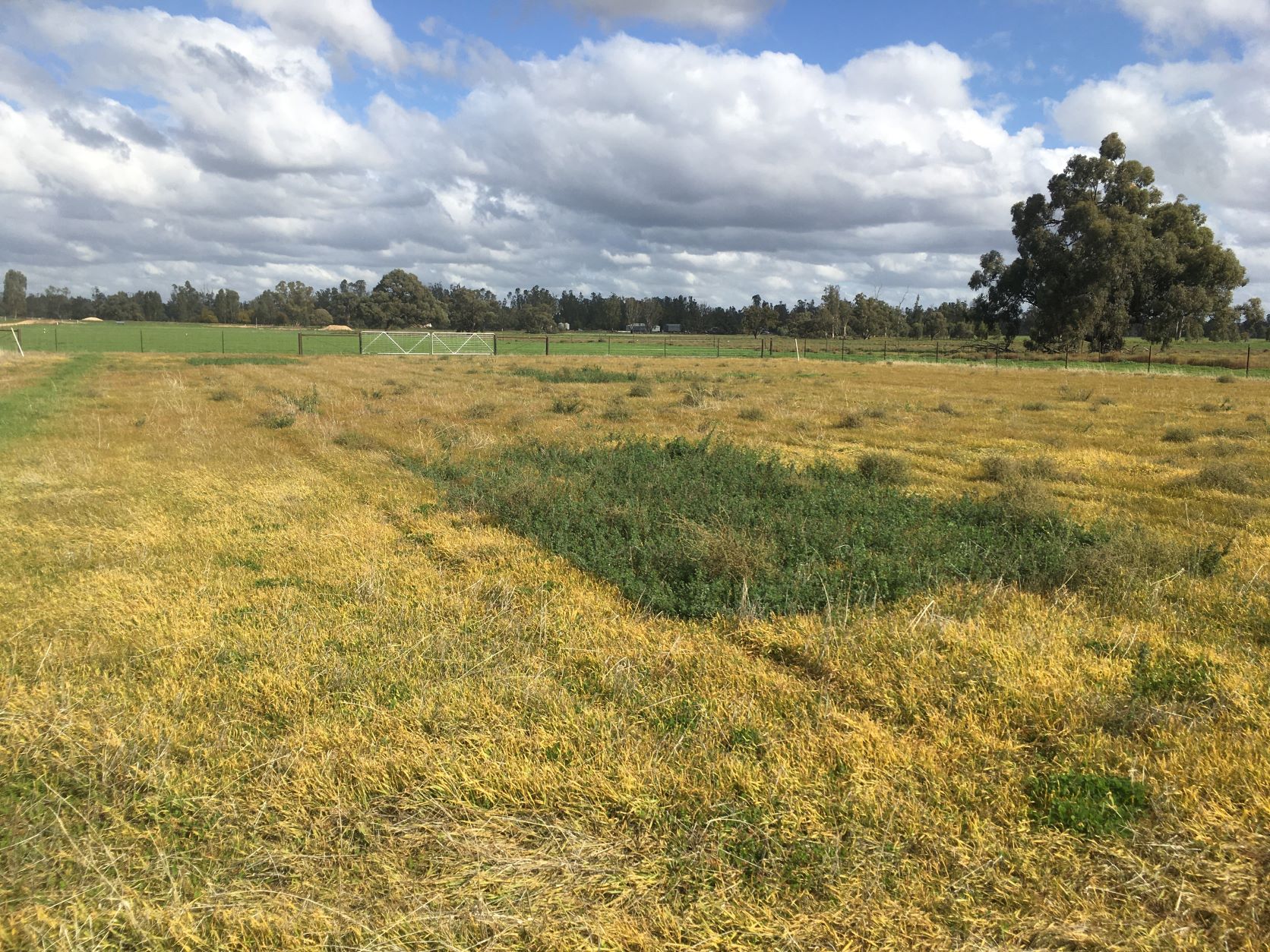 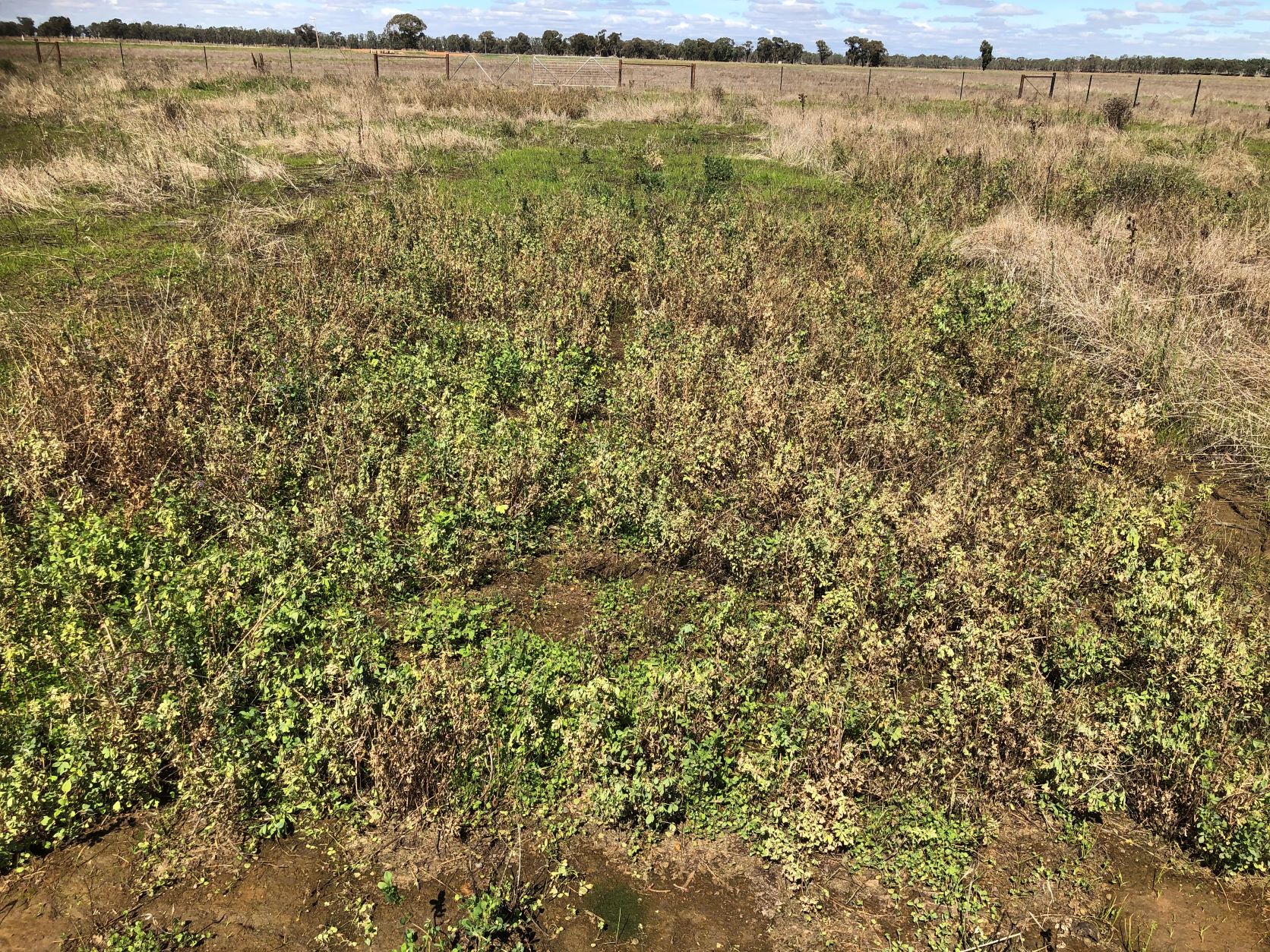