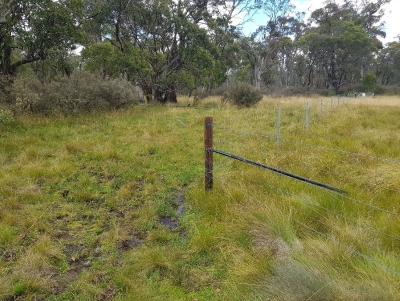 A project to protect several Montane Peatland sites from feral horse grazing in the Upper Murray has increased vegetation cover and reduced pugging within the fenced area since the project began in 2019. The project collaborates with local landholders and the Department of Planning, Industry, and Environment (DPIE).

Montane Peatlands are wetlands in relatively flat elevated areas characterised by a unique vegetation community, including sedges, grasses, forbs, and hummocks of Sphagnum moss. Trees and shrubs may be absent or sparse. Montane Peatlands take thousands of years to form because of the slow build-up of decaying plant material. They play a critical role in the Murray Darling river system by holding and slowly releasing large volumes of water into the top of the catchment.

The Montane Peatlands and Swamps ecological community is listed as endangered in NSW. A large proportion of montane peatlands have already been lost due to land clearing. They are also under ongoing threat from climate change impacts (e.g. increased temperatures, decreased rainfall, and increased incidence of wildfires), feral animals (particularly horses, deer and pigs), grazing, and weed invasion.

The Murray LLS, Montane Peatlands project, set out to protect these sensitive ecosystems on McPherson's plains and Tomney's plains from the impacts of feral animals and grazing through the installation of exclusion fences. Fences were designed to allow native wildlife (such as the threatened Broad-toothed Rat) under the fence while keeping out pest animals such as feral horses. The fences also protect the critically endangered Bago Leek Orchid and Kelton's Leek Orchid, found at the project sites.

Rehabilitation of damaged peatlands is a long-term process, but vegetation recovery is evident at the project sites after two years. Photo points taken in April this year show a significant increase in sedges and grasses within the fenced areas since 2019, and impacts from feral animals are evident only outside the fenced areas.

McPherson's and Tomney's Plains were burnt during the 2019/20 bushfires. The fires impacted the flora and fauna community within the peatlands and put further pressure on an ecological community and threatened species already facing numerous threatening processes. Thanks to bushfire recovery funding from the Australian Government, Murray LLS was able to fence off additional peatland areas in June 2021, increasing the area of Montane peatland protected in the Upper Murray.

We hope to continue to see improved condition and recovery of the sites over time.

We want to acknowledge the great work and immense passion of the late Steve Thompson to get this project off the ground and ensure its ongoing success.

This project is supported by Murray Local Land Services, through funding from the Australian Government's Bushfire Wildlife and Habitat Recovery Program and Catchment Action NSW.