Aboriginal groups working to improve the health of their country 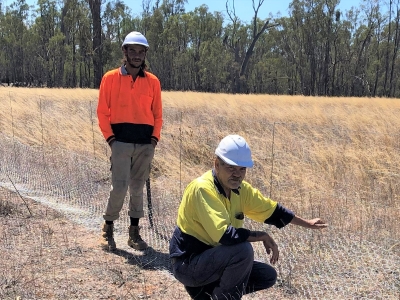 Over the past year, several Indigenous groups have successfully undertaken projects to restore and improve the condition of the Ramsar site.

The Moama LALC has completed a sixteen-week fox baiting program in the Koondrook-Perricoota Forest, with over 400 baits taken over the two eight-week blocks. Over the past three years, 1600 baits have been taken from the forest, significantly reducing the area's fox population. Additional spotlighting surveys carried out confirm the lack of fox numbers.

Moama LALC also placed more than 2 km of netting fence around direct seeding sites in the forest to help control rabbit grazing pressure on sensitive sandhill sites. John Kerr, CEO of the Land Council, said, "The long-term effects of this program have been very beneficial to our community by creating pathways and employment for our community members. This has given members a range of skills, creating future potential employment pathways through training gained by this project. Unfortunately, due to the shorter nature of the contracts, staff turnover can sometimes be an issue, but this can and has led to other opportunities elsewhere, which is a great outcome."

Fox baiting was new to the Yarkuwa crew as they took on a similar project around the Yadabal Lagoon in the Werai forest. With some initial guidance from a local baiting contractor, staff from Yarkuwa undertook a successful twelve-week intensive baiting program to complement other activities they had undertaken at the site, including revegetation, exclusion fencing and monitoring. A total of 71 baits were taken from around the lagoon. The team from Yarkuwa also assisted staff from La Trobe University in a turtle monitoring program underway nearby.

African boxthorn is extremely invasive and can impact ecological and agricultural systems by taking over cropping and grazing areas, outcompeting native species and providing harbour for rabbits and other feral animals.

Over the past year, Cummeragunja LALC joined forces with the Murray River Council to tackle a significant infestation on their property adjacent to the Millewa Forest near Mathoura. After initially attempting to remove the large plants manually, they engaged the Murray River Council's boxthorn puller to complete the work. Over 250 ha of the heavily infested country has been treated with an estimated 50,000 plants pulled or sprayed. Discussions on training Cummeragunja members to spray any regrowth and smaller plants for the rest of the property are currently underway for the upcoming year.

Last year, other significant achievements for the Ramsar project included a pest animal thermal survey covering almost 40,000 ha of the Millewa group of forests, highlighting the large number of feral deer at the site. The implementation of revegetation works and turtle and small-bodied native fish monitoring programs at critical wetlands in the area and trials to measure the impact of saturation fox baiting on turtle nest predation rates. 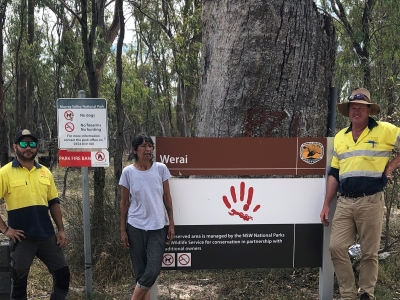