The Western Region is the largest in NSW:  larger than Victoria and Tasmania combined.  This diverse, semi-arid rangeland supports a range of communities with grazing, dryland and irrigated agriculture, mining and tourism the main land uses. 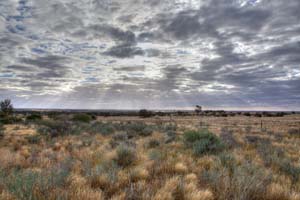 The Western region encompasses one of the most diverse rangeland areas in Australia, comprised of arid and semi-arid land, mostly unsuitable other than in the southern and eastern parts of the region for intensive agriculture practices because of constraints such as unreliable rainfall and soil type.

Approximately 95% of the Western region remains uncleared, however, the condition of the landscape is variable due to impacts of total grazing pressure and changes to fire regimes.  Vegetation ranges from mallee and murray pine woodlands in the south, riparian floodplains and wetlands associated with the river systems, chenopod shrublands in the far west, bimble box woodlands in the central parts of the region to mulga woodlands, brigalow gidgee in the north and floodplains of Coolabah blackbox in the north east.  Invasive native scrub is a major vegetation issue to be managed.

Coordinated programs are undertaken to control unmanaged goats, rabbits, pigs, foxes and cats, and in some areas wild dogs, which threaten agricultural productivity, groundcover and native plants and animals as well as presenting a major biosecurity threat.