Subsoil manuring: Is it worth it? 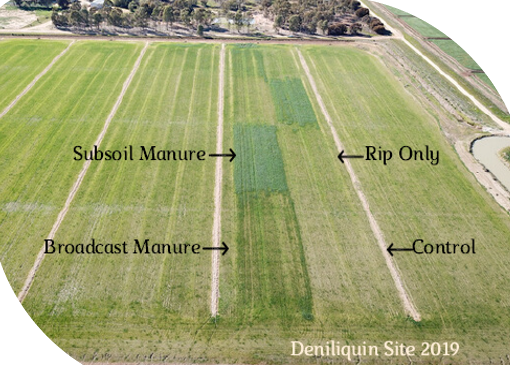 Drilling about 20 tonne per hectare of manure into the subsoil has led to substantial yield increases at several locations across the Murray Valley.  However, it is a slow and expensive process, so Murray Local Land Services (MLLS) is attempting to determine if:

MLLS received funding from Catchment Action NSW to undertake subsoil manuring demonstrations.  These on-farm demonstrations are located on irrigation properties from Logie Brae in the east to Moulamein in the west.  A dryland (i.e. non-irrigated) demonstration is also being conducted near Rand.

What is subsoil manuring?

Subsoil manuring involves drilling about 20 t/ha of manure (usually poultry litter) into the upper subsoil.  The manure is usually drilled in lines (‘sausages’) about 25 to 30 cm deep and 80 cm apart. The aim is to create a favourable zone for root growth in otherwise hostile sodic subsoils.

The subsoils remain sodic, as drilling manure into them doesn’t lower their sodicity.  However, the manure lines give the roots a favourable environment in which to grow. They also encourage microbial activity, which helps create better soil structure around the manure lines, further assisting root growth and moisture extraction.

The manure is also a source of organic nitrogen, boosting plant nutrition.

Some of the local demonstrations compare the effect of broadcasting manure with drilling it into the subsoil.  The surface-applied manure also provides nitrogen to crops and can help improve soil surface structure, but it doesn’t improve root growth into the subsoils.

Our demonstrations have shown that subsoil manuring has a greater benefit than broadcast.

Of the seven trials established last year, only two were taken through to grain harvest (due to drought conditions).  In both these trials, the yield increase from subsoil manuring was about 1.5 t/ha, as shown in the following tables.

How long does the benefit last?

Subsoil manuring is an expensive exercise, so the benefits need to be substantial and long-lasting to warrant the expense. The trials reported above show the initial potential benefit from the practice. However, even if the increase return is about $450/ha, it would take at least four years to repay the cost.

Some preliminary trial work has indicated that there is still a benefit from the practice four years after subsoil manuring. However, the magnitude of the benefit needs to be more closely monitored before any conclusions can be made about the cost-benefit of subsoil manuring.

It needs to be stressed that at this stage, Murray Local Land Services is investigating the practice of subsoil manuring, but does not yet have enough data to say if it is economically viable.