Battling for the Bittern

A comprehensive body of work has been launched in Lake Cargelligo to protect the Australasian Bittern; an iconic Australian bird species under threat. 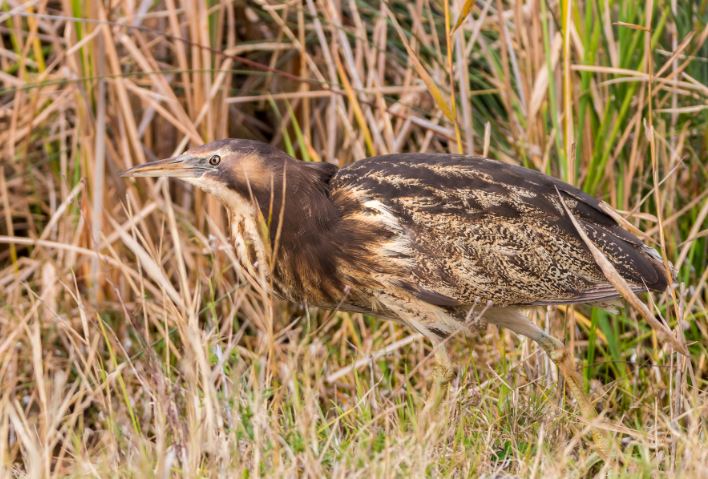 The ‘bunyip bird’ is under threat

“The male bird’s call is an eerie booming sound and thought to have been the origin of the mythical bunyip that lived in creeks, swamps and waterholes,” Ms McIntyre said.

“Unfortunately its numbers have dwindled as this iconic native bird’s habitat has been degraded — there are thought to be less than 1,000 birds left in the wild.

The Battling for the Bittern project was launched in 2018 to support the Australasian Bittern on Lake Cargelligo’s Robinson Crusoe Island and surrounding wetland areas.

The project focuses on reducing threats to the Australasian Bittern by improving habitat and controlling feral pests including pigs, cats and foxes that are known to prey on the chicks and eggs. This will help to long-term survival of this secretive bird that lives and breeds around  Lake Cargelligo.

Funding from Catchment Action NSW has meant Local Land Services, the Robinson Island Crusoe Reserve Trust Group volunteers and other local landholders could work together on a range of practical initiatives to improve local habitat and manage threats.

Contractors were engaged to carry out weed and pest animal control on the island and also a trapping and ground shooting program on a number of private properties surrounding the Lake.

Invasive woody weeds such as African Boxthorn were managed to remove their harbour for pest animals on the island and support native vegetation habitat.

Foxes, pigs and feral cats were targeted to limit their impact on birds, chicks and eggs. Pigs also destroy the reedbed habitat so were an important focus of the control program.

President of the Robinson Crusoe Island Reserve Trust Group, Peter Skipworth, was pleased to see the project come together.

“We’re very happy with all the work completed on the island, the contractors were very easy to work with and completed as much as they could in the time available,” Mr Skipworth said.

“I was very happy to have them on my property and they are welcome back any time.”

Saunders Spraying was engaged to help implement the control program and Director Tim Saunders said the work was well received by landholders involved in the ground shoot.

“The ground shoot was conducted with early morning checks and spotlight controls - pig traps were installed on one property.

“The private landholders involved with the program were more than happy with the results and the manner in which it was carried out. Landholders will be keen to be part of future programs”

Project by the numbers

The 12-month project had a focus on making an onground impact and then supporting landholders to control pests and weeds in the longer term.

In total it saw four hectares of Africa boxthorn controlled on the island to improve local habitat and local landholders were equipped to manage regrowth.

Local Land Services staff and contractors also worked closely with the local community to control pest species over 5,176 hectares through shooting and trapping.

As a follow up, the Local Land Services’ biosecurity team supplied neighbouring landholders with pest animal traps and trail cameras to target and control pests in the future.

Local Land Services will also be working with the Lake Cargelligo community to improve their knowledge and understanding about this threatened bird.

Monitoring and recording of the Australasian Bittern population will be assisted by Lake Cargelligo Birds Facebook page moderator Rebecca van Dyk and members of the Robinson Crusoe Island Reserve Trust.

Through their efforts, we will understand the impact of this project on the breeding success and survival of the Australasian Bittern.

Help us find the small purple-pea (Swainsona recta)Local Land Services, with the support of the Australian Governmen...

Protecting your soil from the wind

By Tim Bartimote – Cropping OfficerTo say it has been a tough few years for those in the agriculture industry,...