Maximising lamb survival has a positive impact on animal welfare and the sheep producer’s profit. Recent research has demonstrated strategies than can be implemented to improve lamb survival.

Mismothering is the most significant cause of lamb death and a high proportion is due to dystocia (lambing difficulties). Ewes that have prolonged and difficult births do not show effective maternal behaviour and are more likely to reject lambs (mismothering) or have lambs that are unable to nurse adequately (starve).

How to minimise lambing difficulties:

It is important to keep their condition score between 3.0 and 3.5. The biggest dystocia risk here is over fat ewes with big lambs.

Traditionally mob sizes of up to 500 for mature ewes and 400 for maiden ewes have been recommended. Research in the past ten years has shown that smaller mobs have higher marking rates in the order of 5% for each 100 ewe decrease in mob size.

These factors all improve the chances of optimal bonding between the ewe and lamb and will also reduce hypothermia in lambs. For optimal bonding, the ewe and lambs need to remain at the birth site for twelve hours (minimum six). This gives time for the ewe to groom the lamb and ensure suckling takes place. If the ewe moves away in a shorter time, at least one lamb is likely to be left behind. If feed on offer is low, the ewe is more likely to move away to look for food. Ewes in poor condition at lambing are also more likely to move away to search for food.

When pasture is limiting is important to consider the best way to supplement these ewes with minimal disturbance. Options include scattering corn or lupins in the paddock, lick feeders, or placing multiple bales of high‐quality hay in accessible areas so that newly lambed ewes do not have to travel far. Reduced mob size will reduce mismothering, resulting in a significant increase in the number of lambs at weaning. The optimum mob size varies with feed on offer and farm topography.

Calcium is important for muscle contractions and, when low, can result in reduced uterine contractions, resulting in lambs dying in the uterus or after a prolonged birth (dystocia). Multiple bearing ewes are more likely to have hypocalcaemia (low calcium) and hypomagnesemia (low magnesium). These cases are also often complicated by high ketones associated with an energy deficiency due to a large lamb or twins or triplets (pregnancy toxaemia).

Severe clinical hypocalcaemia and hypomagnesemia causes affected sheep to lie down and die if they are not treated early. Research has shown that these cases are only the tip of the iceberg: in many flocks more than 20% of sheep grazing typical pastures are low in calcium and magnesium a week before lambing. The proportion of animals affected increases when sheep are grazing vegetative cereal crops or lush annual pastures. These types of pastures are not only low in calcium and magnesium but also often lower in sodium and higher in potassium. High potash can impair the uptake of calcium and magnesium by the rumen and from the bones, exacerbating the problem.

Dystocia increases when there is cold weather in the two weeks before lambing, particularly when this occurs in the three days beforehand. These effects are more significant than the weather during lambing. It is primarily due to the negative effect on the sheep’s energy balance by increasing energy demand by up to 60% and reducing feed intake. Cold weather will also increase the potassium and decrease the magnesium uptake by the root system of the plant.

The proportion of ewes with incomplete dilation of the cervix (causing dystocia) is generally more common when there is an abundance of grass. The debate on the underlying cause of this problem is confounding because there are both more multiple births and lusher pasture with lower calcium and magnesium in a good season and other factors are likely to be contributing.

Supplementation of calcium and magnesium has been shown to:

Studies to date have not shown a significant benefit when supplementing lambing ewes on perennial pasture. Part of the reason for this is the number of other variables that can impact dystocia and lamb survival. Supplementation of calcium and magnesium is inexpensive. With the current price of lambs, it would seem a good option to at least trial supplementation in some mobs of multiple lambing sheep this year and ascertain whether you think it helps on your farm.

For sheep lambing on green feed, the recommended mix is 40:40:20 of causmag: stock lime: salt. If you are grazing crops during lambing, then a calcium, magnesium, salt lick is recommended. If you are not lambing on green feed, a mix of one part salt to two‐part stock lime is sufficient. Start feeding the calcium supplement one month before lambing and continue for the duration of the lambing period.

Adults appear able to tolerate seasonal fluctuations in iodine supply by using reserves stored in the thyroid gland. This reserve is not available to the developing foetus. Selenium deficiency can increase the impact of iodine deficiency.

Thyroid hormones are essential for growth and development of the foetus, particularly the brain, lungs, heart and hair follicles, and contribute especially to survival of the newborn kid. Iodine deficiency makes neonatal lambs very susceptible to cold, wet weather and mortalities may be very high.

Iodine deficiency occurs due to insufficient intake of iodine from pasture. The main iodine deficient areas in Australia are high rainfall areas in the Great Dividing Range and Tasmania. Many soils of the Central Tablelands have low to marginal iodine levels.

Iodine deficiency may also be caused by sheep eating plants containing goitrogens - substances which inhibit the utilisation of dietary iodine. Goitrogens have been detected in some legumes and forage crops, but are considered unlikely to be a significant cause of goitre.

Iodine requirements are highest in the last trimester of pregnancy. Intake of iodine from pasture is lowest in late winter when the requirements of spring lambing ewes are at a peak. Iodine deficiency is most likely to cause goitre in spring lambs when there has been heavy autumn rains and lush pasture growth in autumn and winter.

The need for iodine supplementation will depend partly on the history of the property including a previous diagnosis or suspicion of iodine deficiency on the property or locally, the timing of lambing and seasonal conditions. Speak to your local private veterinarian or District Veterinarian for advice for your circumstances.

Drenching with Potassium Iodide in the last 6-8 weeks of pregnancy is recommended to prevent iodine deficiency causing lambing losses in susceptible flocks. The drench is made up by dissolving 28g of potassium iodide in one litre of water. Each sheep is given 10 ml. It is important to mix the drench just before use. lodised salt can be used in loose licks, iodine containing lick blocks and feed supplements can be used.

These measures are less accurate than drenching because some animals avoid licks and it is impossible to gauge intake with these systems.

Always report unexpected perinatal mortality or livestock abortions to a vet so that they can investigate. Testing to show that we are free of exotic diseases supports our livestock markets. It is important to take precautions such as using personal protective equipment (gloves, overalls, boots, masks and googles) and practice scrupulous personal hygiene when handling placentas and aborted livestock materials. 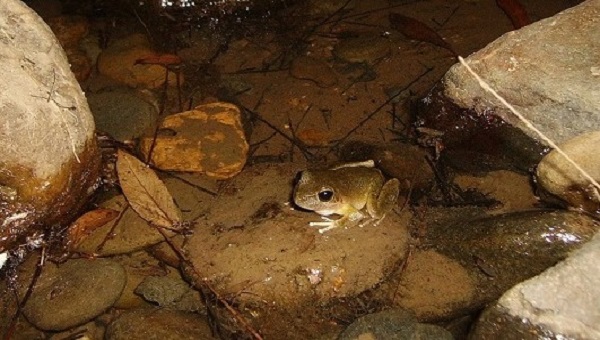 Join us to learn more about the endangered Booroolong frog – once common throughout the NSW tablela...