The Saleyards Travelling Stock Reserve (TSR) along the Namoi River near Gunnedah is an 80 hectare piece of crown land managed by North West Local Land Services. It serves as a major drift way for walking stock moving between Boggabri Road, Kelvin Road and Tamworth Road. In recent years, the area has become very degraded due to unrestricted vehicle access, rubbish dumping and worm digging.

To protect the river and native vegetation, Local Land Services has constructed concrete bollards to restrict vehicle access while still allowing people entry by foot or bicycle and walking stock when necessary. Tree planting has been undertaken in strategic areas of the TSR due to the lack of natural regeneration, to increase the diversity of species and to strengthen linkages between existing remnant vegetation from Blackjack Creek to the river. There are also plans for signage. There is a gate that will allow for access by Local Land Services staff and contractors to undertake management activities such as weed control.

This TSR is an important piece of remnant native vegetation along the Namoi River that supports many native species including koalas, kangaroos, woodland birds, raptors and even the critically endangered regent honeyeater could utilise the vegetation when moving across the landscape. It is also important to protect the riverbanks to reduce the turbidity of the water to encourage native fish such as the Murray cod. 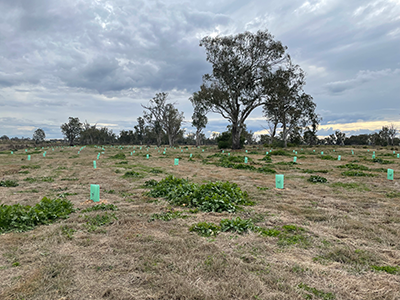 The TSR holds significant aboriginal cultural heritage for the Gomeroi people of Gunnedah with documents stating that families lived along the river in this area up until 1900's.

Upper Mooki Landcare Inc is celebrating the completion of the Upper Mooki Rehydration Project by hosting an event “Creating ...

Our team have been working hard on the Coocooboona Travelling Stock Reserve (TSR), which is located 10km west of Gunnedah on the h...

For 2021 North West Local Land Services is offering two face-to-face training courses in Narrabri, which are free for la...