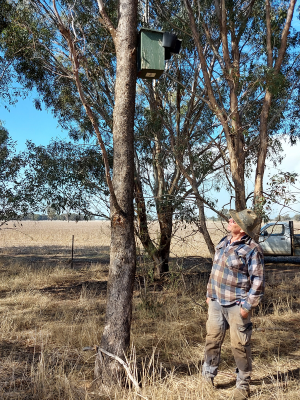 In late December 2020, I joined Tracy Michael from Murray Local Land Services and Trevor Barber from Walla Walla to monitor nest boxes installed on Trevor and Maree’s farm in 2019. The nest boxes were installed in a maturing tree corridor planted over 30 years ago as part of West Hume Landcare’s early programs. Trevor said, “the enthusiasm of young Sue Rose – our first Landcare coordinator saw many of us farmers planting corridors of trees on our farms. The foresight of her work is now evident. We now have five nest boxes in this corridor and have seen two Squirrel Gliders in two boxes, plus evidence of them using another two boxes. Seeing Squirrel Gliders in these nest boxes is even better than the great harvest we just had”. The selection of this site to plant a corridor and then install nest boxes 30 years later might appear random to the casual observer. However, sound evidence-based planning and ecological understanding are underpinning the whole process.

When you look at the landscape of the southwest slopes of NSW from an aerial perspective, it becomes apparent that most of the remaining trees and vegetation occur along roadsides, travelling stock routes and reserves and marked but unused roads (paper lanes). For the native birds, animals and insects, the ability to move freely and safely relies on what we call connectivity – that is - a landscape that has native vegetation (particularly trees) spaced close enough to each other.

Historically we may have described our landscape as “park-like”, but now we describe it as fragmented – a patchy mix of linear vegetation with large gaps between trees. It becomes clear that reconnecting all these patches will be critical for native wildlife to have a future in and on our farms. A deep understanding of ecology and landscapes guided Sue to suggest planting Trevor and Maree’s corridor in this location. Sue has dreamt of connecting the whole landscape back to Billabong Creek – a remarkable remnant and mostly continuous corridor in the area. Fast forward to 2019 when Tracy Michael from Murray LLS was given the task of installing over 100 nest boxes for Squirrel Gliders within the Squirrel Glider LAMP project area. Installing artificial homes (nest boxes) for wildlife can help support their ability to breed, move into new feeding areas or home ranges. Nest boxes mimic what the animals would normally seek – tree hollows. Tree hollows occur in large old dead and living trees. Hollow creation is very slow, especially in Yellow Box – the favoured tree for Squirrel Gliders. Think 100’s of years!!

Tracy’s careful research and methodical planning resulted in approaching a small number of landholder’s based on a strict set of criteria. This included identifying sites lacking natural tree hollows near known locations of Squirrel Gliders. Nest boxes were placed at various sites, including large patches of remnant vegetation with very few suitable tree hollows and revegetation areas older than 20 years, preferably where the revegetation was creating links between remnant patches. Trevor and Maree’s site was clearly a top runner. 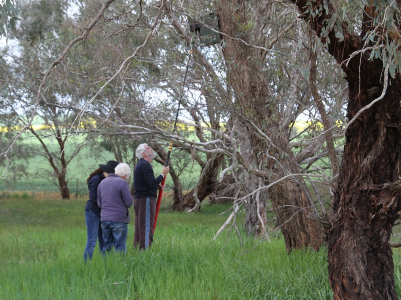 This brings us to our monitoring excursion 18 months after the nest boxes were installed. Using specialised equipment (pole camera and monitor), we can look into the nest boxes during the day when  Squirrel gliders are typically sleeping (they are nocturnal creatures). There is minimal disturbance to the animal, and it is a quick method for confirming the presence or absence of animals. The camera can also tell us if the nest boxes have any other animals occupying them or if there is evidence that the box has been used. Evidence of use by a Squirrel Glider is usually determined by seeing leaves arranged into a nest-like shape. Fresh leaves would indicate recent use, older and decaying leaves less recent use. When we looked into Trevor and Maree’s nest boxes, we were excited to see them being used.  “Initially, I was sceptical about whether the Squirrel Glider would use the boxes as I had never even seen a Squirrel Glider,” said Trevor, “I was genuinely surprised when we did find them. It has been really rewarding, and it appears the animals we saw last December were not fully grown. When we looked at them again at Easter, they were bigger”.

This would fit the timing of when young may be looking to disperse and find new home ranges or mates. This corridor links two amazing roadsides filled with old hollow-bearing trees. What has been created is like a safe cycling zone amongst a busy road network. These Squirrel Gliders can now move to new home ranges, breed further outside of a restricted area and importantly utilise the plants for food as they look for insects, spiders, beetles, grubs and nectar.

Creating this web of connectivity across the landscape may appear to be an obvious approach to ongoing revegetation and remnant protection projects. It is undoubtedly the criteria used by the current and equally enthusiastic West Hume Landcare coordinator Kathie Le Busque for projects such as the Grassy Woodland project. Kathie says, “we are continuously building upon early Landcare projects, and we can now see that the accumulative work over the last 30 years is starting to create a connected landscape”.

As the project officer for the Squirrel Glider LAMP Project, I not only get to witness these delights of seeing Squirrel Gliders using nest boxes, but I get to see the excitement and joy it brings the landholders I work with.